Since my last blog post Off To Egypt (Not Literally) I have uncovered some interesting items about Howard Carter’s house which I thought I would share with you. (Yes I know. Two blog posts in one week. I’m spoiling you.)

As I mentioned in that post, I am now typing up and researching the letters and postcards that Ethel wrote to my grandmother from Egpyt when she and Lady Burghclere visited there in 1928. It seems that the main purpose of their visit was to meet up with and support archaeologist Howard Carter following his discovery of Tutankhamun’s tomb six years earlier.

This is an extract from one of the postcards that Ethel wrote from Egypt:

“Had lunch with Mr Carter at his little house and then spent the rest of the time in the Valley of the Kings and most of that in the tomb of Tutankhamun and the laboratory where the things are being fixed up. Hope to have time for a detailed letter soon.”

This “little house” was built for Howard Carter at Thebes, now the modern city of Luxor, by his patron and friend Lord Carnarvon (Lady Burghclere’s brother) in 1910 and used bricks sent over from England. Carter designed the house himself and it was always known as “Carter’s Castle” which was an ironic reference to Lord Carnarvon’s home, Highclere Castle. I have it on very good authority that it was Lady Almina (Lord Carnarvon’s wife) who was responsible for the ideas behind the wiring of the house. 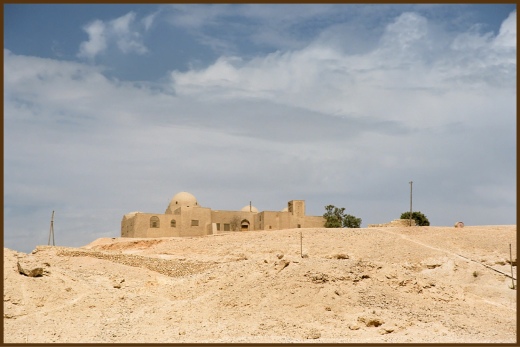 The house was reopened as a museum in 2009 and there is an extremely interesting blog post by renowned Egyptologist and author Jane Akshar about her involvement in the grand opening ceremony which was attended by several dignitaries including the present Lord and Lady Carnarvon, as well as members of the Carter family. Jane has posted some great photos that she took at the event which really give you an insight into what the house was like when Carter lived there.

I also came across a post by Lady Carnarvon herself about the Carter house which is well worth a look. She tells us that Lord Carnarvon (the 5th Earl) often stayed at the house rather than at his hotel as it was nearer to the dig sites. He even built a darkroom at the back of the house so that he could process his photographs. Some of these photographs may be some of the ones that Lady Carnarvon has kindly shared in this post.

Finally, just to make sure that the house was still in existence today, I did a bit more research and found a post on Egypt Today, the news website of the nation’s oldest and bestselling English-language social affairs magazine. Again there are some excellent photos including ones of Howard Carter’s original tools and his typewriter. Even more interesting was finding out from this post that work is being done to corroborate a new theory that there may be more to discover behind the walls of the burial chamber and treasury of the tomb of Tutankhamun than was first thought. The plot thickens! 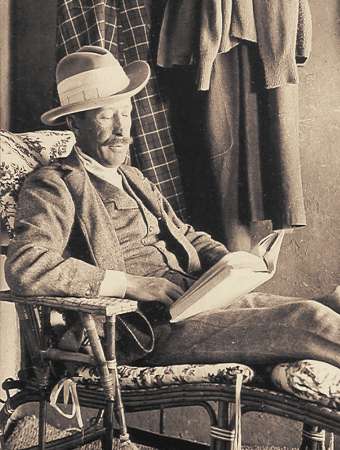 I seem to start every blog post I write at the moment with an apology for not having blogged recently and this one is no exception. But I am back and still in the land of the living (no thanks to the whole menopause malarkey!) and off to Egypt. Not literally, sadly, although to be fair that doesn’t really bother me as I definitely don’t have the desire for travel that Ethel and Lady Burghclere clearly had.

After over five months of not working on My Dear Elsie for all sorts of reasons, I suddenly felt a real sense of urgency to crack on with it. I’m now determined to get all the rest of Ethel’s letters and postcards typed up as soon as possible and the end-notes for each one researched and written. It feels really important to at least have a manuscript of the book in existence in case anything happens to me. After all, with everything that’s been going on in the world recently, it does make you a lot more aware of the fragility of life.

But on to happier topics! The section of the book I’ve now started typing up contains Ethel’s letters and postcards sent to my grandmother Elsie from January 1928 to March 1928 when Ethel and Lady Burghclere travelled to Egypt and the Holy Land. The reason for this trip may well be explained by this quote from an earlier letter that Ethel wrote to my grandmother:

“Now comes along Mr Howard Carter who has been lecturing in America this last few months. He has heard from the Egyptian government who want him to return, offering everything, but apparently he reads between the lines that they mean him to work under them. This in a sense he does not want to do but as he doesn’t want a thing out of the tomb and as he has difficulty to get the money out of Almina, Lady Carnarvon – why not? So what he really wants is Lady B to go out to him. He says she will have more influence than anyone else. He finds it a great drawback or did last year in not having any members of the family out there to back him up. Lady B is seriously contemplating same and in that case if I can choose, what shall I say? Egypt or America! Could anyone find a more difficult choice?” 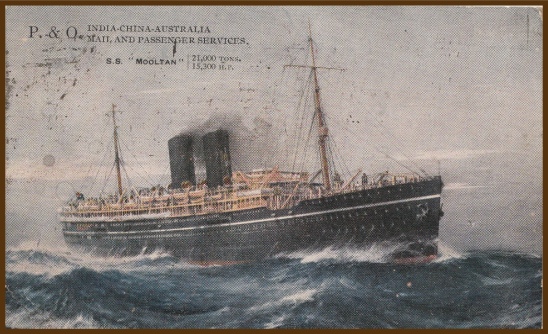 In many ways, the letters and postcards written from Egypt are among some of the most fascinating and interesting in the whole collection. In particular, the letters that Ethel writes after she and Lady Burghclere are shown round the Tutankhamun excavations and relics by Howard Carter himself are amazing. Some of her descriptions are wonderful to read and really help to bring the whole experience alive.

Here is a little taster of one of the letters that I’ve picked out for you:

“You would not believe the marvellous workmanship unless you actually saw it. Hundreds and hundreds of things, even to a beautiful ostrich feather fan such as they carry today. There is a dummy on which his [Tutankhamun’s] clothes were made, his slippers and a little gold charm he wore round his neck fashioned in a copy of his favourite dog. A most beautiful thing, really. I must not stop now to tell you all the wonderful things I saw but I hope I shall remember them to tell you later.”

Ethel starts writing this letter from the Semiramis Hotel in Cairo and while I was doing some research on the Semiramis, I came across an excellent website based around a book by the journalist Andrew Humphreys called Grand Hotels of Egypt and its follow-up On the Nile. If you’re interested in finding out more, the website can be found at http://grandhotelsegypt.com 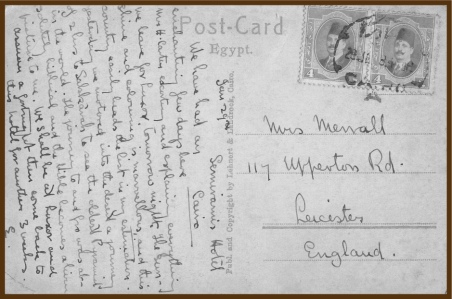 I left a comment on one of the blog posts and as a result, a very nice lady from Nashville in the USA contacted me showing great enthusiasm for and interest in My Dear Elsie. This has encouraged me even more to get on with the book. She also very kindly provided me with some extremely useful information on the famous Vanderbilt family as in an earlier letter from 1925, Ethel mentions that she and Lady Burghclere are going to stay with the Vanderbilts when they get to New York.

So I promise that by the time I blog again, I will have made progress! 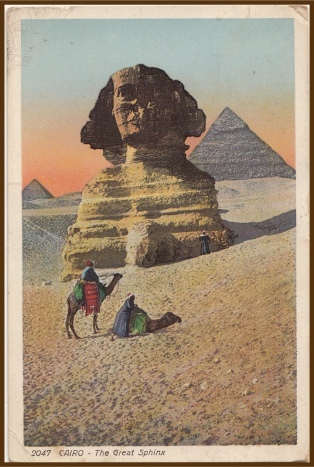