We have spent a most undecided month, first turning to one place and then to another. However, today we have really finished fixing everything up and we sail on the “Laconia” for the West Indies and South America on Jan 19th from Southampton. It is a big Cunarder so should be comfortable. We go straight to Madeira, St Vincent, Martinique, Tobago and the Barbadoes, Trinidad, La Guayra (Venezuela) and the Panama Canal, then up to Jamaica, Havanna, the Bahamas and Bermuda. The Laconia then returns to England but we are going to stay a month in Jamaica and then cross to America, either to New Orleans or Palm Beach in Florida.

This is the opening section of the letter that Ethel North, Lady Winifred Burghclere’s maid and companion, wrote to my grandmother in December 1928. It is the letter I am currently typing up and researching for my proposed book My Dear Elsie and is another example of an “innocent” looking letter that ends up packing quite a punch.

The letter that Ethel wrote to my grandmother in 1928

When I looked up the RMS Laconia, expecting to find nothing more than details of a palatial cruise liner, complete with swimming pool and piano lounge, I discovered something called “the Laconia incident”. This turned out to be one of the most controversial and tragic incidents of the Second World War although I had never even heard about it.

The Laconia made her maiden voyage from Southampton to New York in 1922, six years before Ethel’s letter was written. When WWII broke out in 1939, the cruiser was commandeered by the British Government as a troop ship and fitted with guns. In September 1942, she was on her way from Egypt to Britain with around 2,700 people on board among which were 1800 Italian POWs and 80 civilians including women and children who were mainly the families of servicemen.

Just off the coast of West Africa, the Laconia was detected by a German U-boat which, given that Britain was at war with Germany, proceeded to torpedo the ship. Several hundred people on the Laconia were killed instantly and around 2,000 survivors ended up in the shark-infested waters of the Atlantic Ocean.

What happened next is a remarkable example of man’s “humanity” to man, given that this was war-time and all bets were off. The commander of the German U-boat, a man named Werner Hartenstein, decided to act on his own initiative, regardless of how badly it would go down at German HQ and began to mount a rescue operation to save as many of the survivors in the sea as possible. How his crew felt about this is anyone’s guess, given that only a few hours before they had been instructed to fire torpedoes at the same people.

With the rescue mission well underway and his submarine still on the surface of the water, Hartenstein requested assistance from other shipping in the area. As a result, a small convoy of German U-boats with life boats containing survivors and flying under the banner of the Red Cross, was able to make its way towards the French rescue ships that had set out to meet them from Senegal.

Unfortunately, news of the convoy reached a nearby American airfield. A B-24 bomber pilot who, either because he didn’t see the Red Cross banner or saw it and chose to ignore it, spotted the convoy and asked for orders. The Airfield commander, Captain Robert Richardson, decided to give the command to bomb both the U-boats and the life boats. As a result, Hartenstein was forced to order many of the survivors he had rescued to be thrown back into the sea so that he could perform a crash dive to protect his submarine and crew. A total of 1,113 survivors were eventually rescued, but 1,619 died, most of whom were the Italian POWs that had been kept in the hold of the ship. Altogether, of the 2,725 passengers that had embarked from Cape Town, only 1,500 survived. 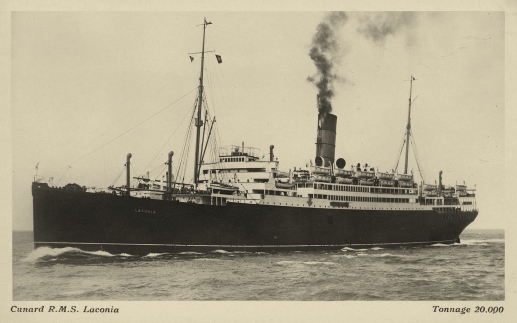 As a result of what later become known as “the Laconia incident”, German authorities issued instructions to all U-boat commanders not to rescue survivors in the future. Hartenstein himself was killed six months later when his U-boat came under fire from Allied Forces while Captain Richardson was never prosecuted but went on to serve a long career in the US Air Force and lived until he was 92.

In 2004, the acclaimed TV dramatist Alan Bleasdale heard about the story of the Laconia and became fascinated by it, especially when he discovered that many of the sailors who had been on board the ship came from his home city of Liverpool. He decided to write a play entitled The Sinking of the Laconia and this aired on the BBC in 2011.

By a strange coincidence, Bleasdale’s play was shown again on the BBC in May 2018, just a couple of weeks after I had found out about “the Laconia incident” myself. I watched it with some trepidation, partly because I’m not comfortable watching dramas about incidents where real people have been killed (I’ve never watched the film Titanic for that reason) and also because I thought it would be pretty harrowing. It was, but it was also extremely well done, very gripping (even though I knew the ending) and really made me think about what the poet Wilfred Owen described as “War, and the pity of War.”

It also made me think a lot about who the good and bad guys were in this whole tragic incident. Of course, it helped that the role of the German U-boat captain Werner Hartenstein was played by an extremely handsome German actor and the American Airfield commander was not, but the play does have a great deal to say about the ethics of war. 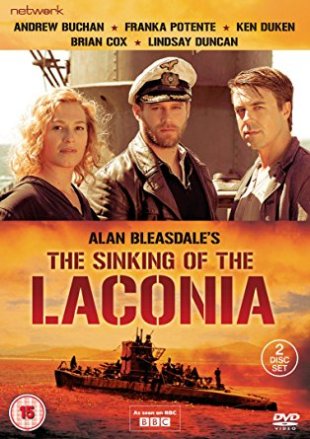 If you are interested in finding out more about The Laconia Incident, I can highly recommend the following links which include some very moving testimonies from those who were on board and survived.

Of course, whether Ethel and Lady Burghclere actually got to sail on the Laconia and visit all those places that Ethel lists at the beginning of her letter is another story. You will have to keep following this blog (or wait for my book to get published!) to find out.